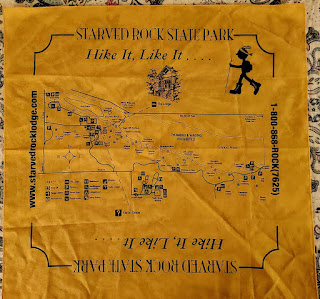 The Bandana King...
That small square of cotton,
Ancient symbol of freedom,
Comfort and protection,
A place to hide,
A way to be seen,
Hot pad at the campfire,
Outlaw,
Biker,
Hippie,
Rocker,
A classic,
As American as apple pie,
But more like hot dog,
I can mask them with the best of 'em,
Have a stout collection,
Maybe someday I'll start a bandana museum,
Classes on folding,
Janice singing Bobby McGee,
Long hair a uniform requirement,
Straight or ponytail,
Like prayer flags for an American heart,
Maybe the bandana will survive the corona,
Move from my face to my head,
But one things for sure,
No one's laughing at me for collecting them,
But I don't mind if they do,
Just wear yours,
Red or blue,
Green grey or yellow,
Black or purple,
If you want to be cool.
AquarianM
By: Daniel A. Stafford
© 04/13/2020
Posted by AquarianM at 1:31 AM
Email ThisBlogThis!Share to TwitterShare to FacebookShare to Pinterest

Solidarity,
Fissures,
Facts,
Fakes,
In the end it's what it takes.

Fear,
Hope,
Dread and take-out,
The whole world gone virtual,
Like the scientists theorize,
Our lives happen in a hologram.

We're all the lone ranger now.

Anti-social distancing games,
Love from a distance,
So strange now,
A month ago,
It was hands you'd shake.

If you can sew,
Don't sow paranoia,
Be a good citizen before it kills you to,
This isn't forever,
But it'll be awhile.

Essentials work like dogs,
The rest bored and restless,
This pandemic dichotomy,
Might be the biggest killer of all,
So says the masked distancer,
Sword high over a TP roll.

Posted by AquarianM at 2:08 AM
Email ThisBlogThis!Share to TwitterShare to FacebookShare to Pinterest

The Legend Of Lone-Hand Dan...

The Legend Of Lone-Hand Dan... Euchre - the only team sport that uses playing cards.

He lived in the Carlton Hotel,
An old run-down place in a small Wisconsin town,
Built in the late 1800's,
With a bar in the lobby,
And two floors of drunks and lost souls above,
A God-send at $30.00 per week.

The crowd would gather on a Friday night at good ol' Steve Kessler's place,
Stick Man who looked like Festus only taller and way skinnier,
A decent soul maybe a little lost,
Russell and Mikki who were brother and sister,
One cool and one beautiful,
Egor of the silence with a vacuous but deceptive smile,
Rotundo the Young and Round,
And of course,
Lone-Hand Dan.

The beer was bought,
The kitchen table set,
The cards were readied,
The first two teams of partners chosen,
The contest began.

In Euchre the deal always passes to the left.

Second round,
Deal passes to Dan,
That special deck of Steve's,
The slow methodical shuffle Dan uses,
Old-school let the cards fall over the cards,
Intent with focus he shuffles and shuffles...

"Will you quit shuffling and deal already?!"
"Nope."

...the final card fall he feels it,
"Snick!"
One more time over and the cards are dealt.

The light over the table is burning bright,
The crowd around the table watches,
Sure enough someone calls Trump,
The inevitable words are spoken:
"I'm going alone."

It's a little bit heebie-jeebie,
But when Lone-Hand Dan deals off THAT deck of Steve's,
Somebody is getting dealt a loner,
Might be Dan's team,
Might be the other,
But SOMEONE is going it alone.

Another round,
The deal passes to the left...

And THAT my friends,
Is why in Edgerton, Wisconsin,
Where they still have a Tobacco Days festival,
THIS poet will always be known to a certain crowd,
As "Lone-Hand Dan." Author's note:
Entirely true story, Any resemblance to persons living or dead is blatantly intentional, and in their memory. It was uncanny, even to me.
(In fond memory of Steve Kessler, who rode off into the Sunset some twenty-three years ago. I hope your butt is living it up Up There, ya ol' coot.)

http://www.lulu.com/spotlight/coloringbookforallages
Posted by AquarianM at 2:05 AM
Email ThisBlogThis!Share to TwitterShare to FacebookShare to Pinterest

Sometimes forgotten old things bubble to the surface of your particular pool of time,

Most especially in this era of recorded everything.

An old TV show from over a decade ago,

From my zombie workaholic era,

I missed it working the graveyard shift.

The ghost of its two-season run haunted us this past month,

A glimpse into a time capsule from 2003,

One that died a premature death,

Despite its utter brilliance and highly poetic sitcom patina.

Georgia Lass may have been obliterated by a flying toilet from the cosmos at 18,

A stand-in for those we've lost in every decade of the last century.

I watered her grave when she smiled back at her headstone,

All dark humor and love that outlasts everything.

By: Daniel A. Stafford

A binge-watch of the 2003 sitcom "Dead Like Me" will stick with me for a very, very long time.

Posted by AquarianM at 1:57 AM
Email ThisBlogThis!Share to TwitterShare to FacebookShare to Pinterest

Love Zone...
You're in my love zone,
This ain't a friend zone,
I believe in you,
Know this is true,
Baby you never have to be alone,
You're in my love zone,
More than just this song,
No matter how long.
(Not finished, pending additional writing)
AquarianM
By: Daniel A. Stafford
© 11/28/2019
Posted by AquarianM at 12:53 PM
Email ThisBlogThis!Share to TwitterShare to FacebookShare to Pinterest

All this sound locked in my head,
A bottled-up devotion,
Right brain in chains,
Clock-constrained,
A slave to the wallet,
Living in a capitalist dream.

My sax hasn't been out of the case,
Must be five years now,
I still remember the tast of a new fresh reed,
All starch and music,
Thank the universe for poetry,
My only right-brain escape from locked- in syndrome.

Left logic is always out on the town,
But the right side barely gets words.

Posted by AquarianM at 2:23 AM
Email ThisBlogThis!Share to TwitterShare to FacebookShare to Pinterest
Older Posts Home
Subscribe to: Posts (Atom)

Available books of poetry
by Daniel A. Stafford:

Poetry/photography of a beautiful place

13 poems all around life

At the edge of sand and surf

Ghosts of the Fall

54 poems of Halloween & the Fall season

15 poems to raise your energy level.

The above links are all to the e-book versions of these chapbooks.
For paperback versions and to view a listing of all my books as they are released click HERE: Dan Stafford's Poetic Universe

AquarianM
I've been a technology & science geek since I saw the Apollo Moon landing in 3rd grade Summer school. Radar tech at 17 years old, 21 tears in Telecommunications, building web sites in Blogger & Wordpress, PC repair, and lately, studying and teaching Information Technology. I'm a one-tour Air Force veteran and a member of Civil Air Patrol. I have written poetry for nearly two decades, and I draw and paint a bit. Married for 19 years (so far) with one son and one stepson. I'm also a bookworm from way, way back, and love hard science fiction, space operas, and fantasy.